This is a Path, Others have walked it before you, Others may walk it with you, and others will walk it after you, But no one can walk it for you.

The Story Of Forget Me Not 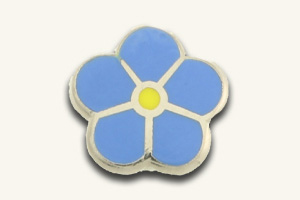 In the years between World War 1 and World War 2, The blue Forget Me Not Emblem (Das Vergissmeinnicht) was a standard symbol used by most charitable organizations in Germany, with a very clear meaning: “Do not forget the poor and the destitute“.

It was first introduced in German Masonry in 1926, well before the Nazi era, at the annual Communication of the Grand Lodge Zur Sonne, in Bremen, where it was distributed to all the participants. That was a terrible time in Germany, economically speaking, further aggravated in 1929 following that year’s Great Depression.

That economic situation contributed to Hitler’s accession to power. Many people depended on charity, some of which was Masonic. Distributing the forget-me-not at the Grand Lodge Communication was meant to remind German Brethren of the charitable activities of the Grand Lodge.

In early 1934, it became evident that Freemasonry was in danger.  In that same year, the Grand Lodge of the Sun (one of the pre-war German Grand Lodges, located in Bayreuth) realizing the grave dangers involved, adopted the little blue Forget Me Not flower as a substitute for the traditional square and compasses.

It was felt the flower would provide brethren with an outward means of identification while lessening the risk of possible recognition in public by the Nazis, who were engaged in wholesale confiscation of all Masonic Lodge properties. Freemasonry went undercover, and this delicate flower assumed its role as a symbol of Masonry surviving throughout the reign of darkness.

In 1936 the Winterhilfswerk (a non-Masonic winter charity drive) held a collection and used and distributed the same symbol, again with its obvious charitable connotation. Some of the Masons who remembered the 1926 Communication possibly also wore it later as a sign of recognition. We have no evidence of that and its general signification still was charity, but not specifically Masonic charity.

During the ensuing decade of Nazi power, a little blue Forget Me Not flower worn in a Brother’s lapel served as one method whereby brethren could identify each other in public (although even then it was not always safe to wear any non-Nazi pin), and in cities and concentration camps throughout Europe. The Forget Me Not distinguished the lapels of countless brethren who staunchly refused to allow the symbolic Light of Masonry to be completely extinguished.

When the Grand Lodge of the Sun was reopened in Bayreuth in 1947, by Past Grand Master  Beyer, a little pin in the shape of a Forget Me Not was officially adopted as the emblem of that first annual convention of the brethren who had survived the bitter years of semi-darkness to rekindle the Masonic Light.

At the first Annual Convent of the new United Grand Lodges Of Germany AF&AM (VGLvD), in 1948 Bro. Theodor Vogel, Master of the Lodge “Zum weißen Gold am Kornberg”, in Selb (then in Western-occupied Germany), remembered the 1926 and 1936 pin, had a few hundred made and started handing it out as a Masonic symbol wherever he went. When Brother Vogel was later elected GM of the Grand Lodge AFuAM of Germany and visited a Grand Masters’ conference in Washington, DC, he distributed.

But is the story True?

Information about the Masonic tradition surrounding the blue forget me not amounts to very little. It's true that the flower was used by some German Masons about 1926, and it appears likely that in March 1938 some of them did wear it again as a Nazi badge, even though by an extraordinary coincidence, it had been chosen as a Masonic emblem twelve years earlier. It is likely, not true that it was ever worn after March 1938 as a secret means of recognition.

However, even if many German Masons (together with the great majority of German citizens of that time) never objected to the Nazi politics and went so far as to support Hitler, some were brave enough to fight him openly.

Based on the membership of all the then existing German Lodges, it is likely that around 1 or 2%. Out of the 174 Lodges which participated in the creation of the first United Grand Lodge of Germany, five only belonged to the Symbolical Grand Lodge of 1930, the only German Grand Lodge which resisted Hitler.

For human and political reasons as well, those Masons who thought it their duty to rebuild German Freemasonry once the War was over could hardly tell the whole truth to their foreign brethren. I believe they might have told the story of those dark years differently, but I am ready to admit that it is probably easier to say so in 2009 than it was in the 1950s.

Accordingly, a legend was born. Not the legend of the forget-me-not, but that of a German Freemasonry too weak to resist, banned as soon as Hitler became Chancellor of the Reich, wearing a badge on the streets and – of all things ! – in concentration camps. That legend was likely born as the result of an unconscious effort to inhibit the past as well as a conscious maneuver. It was believed not only because it was the logical thing to do, but also because it was reassuring to imagine Freemasons acting according to their ideals, fighting for freedom and defending it.

Let's keep it at that and let us admit to the Masonic Brotherhood of the blue Forget Me Not and thus did a simple flower blossom forth into a symbol of the fraternity, and become perhaps the most widely worn emblem among Freemasons in Germany.

In the years since adoption, its significance world-wide has been attested to by the tens of thousands of brethren who now display it with meaningful pride.